PCF spent the day at Emlen Elementary in East Mt. Airy to launch a new way for us to support schools with classroom computers.

PCF’s “IT Support Team” program refurbishes and installs computers on-site with the help of the school’s own students. These students learned a lot while PCF benefitted from their labor. And together we made 4 teachers very happy campers with computers in their classrooms.

Earlier this year DAO Technologies donated a lot of their time and devised a great new way for PCF to ‘refurbish’ our computers. Rather than customize each machine individually, we now configure a master machine for a school and then basically ‘stamp’ it onto the other machines.  The process is called “imaging” and is very fast, error free, and simple enough for many 5th graders to apply.

Scroll down for photos.

How the students ‘refurbished’ their own computers today:

PCF’s Jan Deruiter and three 5th graders set up a refurbishing station on the school’s conference room table. The students set up a server that was connected to computers for refurbishing (via a hardwired gigabit network).

They then forced those machines to boot from USB sticks so they could wipe the drives and install our customized version of Linux on them.

This involved executing a series of Linux commands to pull the “image” from the server and install it onto the machines.

One of the students helped install 11 of the newly refurbished (16) computers into four separate classrooms while the other two students continued imaging computers on their own!  “Installing computers” today also entailed moving a large table from an empty classroom (two floors up), running network cabling through the ceiling and redoing some existing electrical wiring.

These students were incredibly curious, helpful and learned a lot along the way. Not just how to replicate the machines (which involves mapping the drive, copying and installing the image, etc.) but also how to set up a network, basic wiring, etc.

PCF made a leap of sorts today towards our goal of empowering schools to become more independent by utilizing their own students to help with IT. These 5th graders today will be able to keep a significant number of the school’s computers (ours) up to date and running smoothly!

A reminder why these classroom computers are so critical:

Many of our public school students are behind in math and basic reading/writing skills. It’s not uncommon for half (!) of an early grade class’ students to be designated as such. Luckily, the School District has purchased licenses for the students in need. But often these students are simply unable to get in their computer time as there are not enough computers to go around.

For instance, one 1st grade classroom has 17 students signed up for Lexia (a premium reading tutorial website by Rosetta Stone). But with only two computers in the room, it had been almost impossible to ensure that each student got in their required 2 hours every week. So the 5 additional computers PCF added to her room today will benefit those students and therefore the entire class.

A reminder that we need your help:

PCF is entirely funded by donations. Please consider making a donation to pay for refurbishing & installation parts, and basic overhead. We need your help to be able to support schools like Emlen.

Teachers and school administrators: learn more about our “IT Support Teams” program or apply for classroom computers. 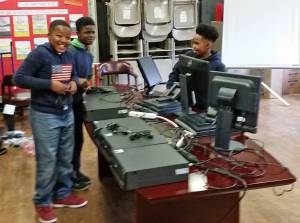 We turned the conference room into a refurbishing station. 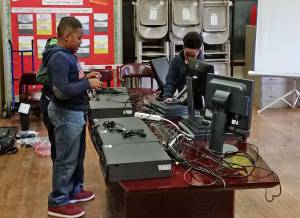 Setting up the machines and the network. 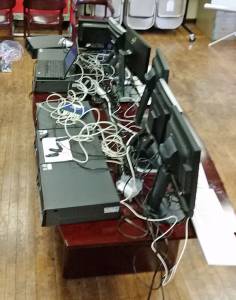 Our laptop server and 6 computers to be “imaged”. 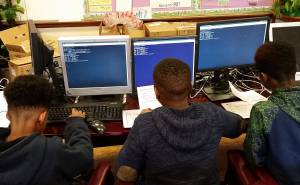 Cloning our ‘master’ image across the network. 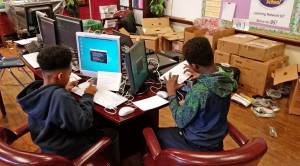 Learning some Linux along the way? 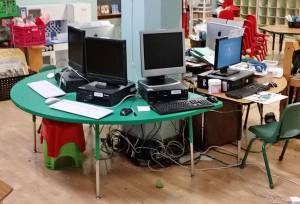 We found the green table in an empty room two floors up! 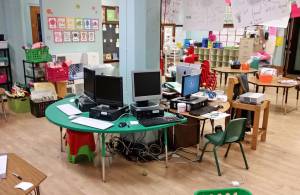 Four desktops and a laptop for a first grade classroom.. 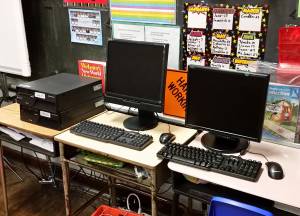 Two machines and networking in another. 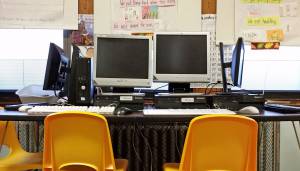 Four computers on the second floor. 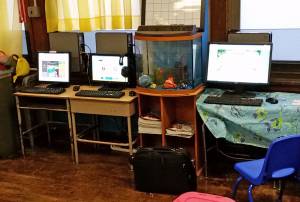 Even the fish are wired now 🙂