PCF changing children’s lives one computer at a time 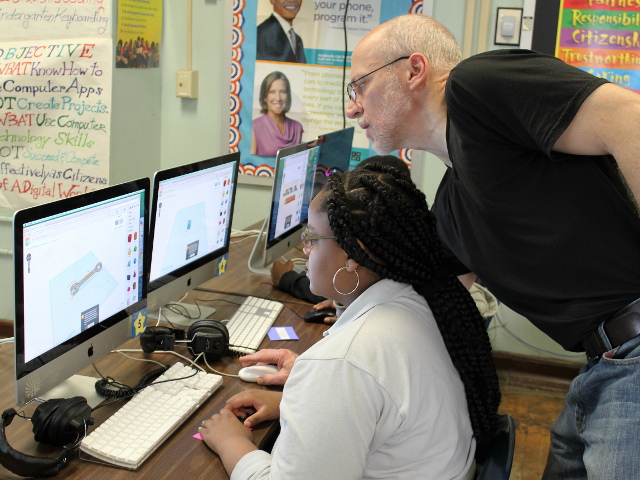 West Mt. Airy resident Jan Deruiter held a fifth-grade class at Eleanor Emlen Elementary School, in Mt. Airy spellbound as he explained how students could use a 3D printer to create objects such as key chains, bracelets, rings, whistles, cubes, chess pieces and countless other items.

Afterward, he showed them a newspaper article published in the The New York Times entitled “3-D Printing Prosthetic Hands That Are Anything but Ordinary” written by Jacqueline Mrozfeb. The article explained how doctors are using 3D printers to create cheap prosthetics for children who are missing limbs because of a birth defect or accident.

Instead of buying state-of-the-art prosthetic replacements that cost thousands of dollars, organizations like e-NABLE, an international group of volunteers, use their 3D printers to create free, printed hands and arms that look like limbs from a Transformer for those in need of upper limb assistive devices.

PCF is working to bridge the digital divide between students in cash- starved inner-city public schools and those in the suburbs. The organization, located in East Falls, also works to provide computers to low-income families that do not have them and teaches 3D printing and computer literacy classes in Philadelphia public schools like Emlen, where Deruiter teaches on Tuesday mornings.

He said that thanks to the generosity of a donor, PCF has an old first-generation 3D printer it uses to teach 3D printing classes at local public schools. He explained to students that the first step in creating an object using a 3D printer is to create a blueprint of the object. A few minutes later, he showed the students, step-by-step, how to use Tinkercad, an online 3D design and printing tool.

“Sending kids home with plastic trinkets they created and printed on a 3D printer is a great motivator,” Deruiter said. “The process of creating 3D artwork teaches students how to use the mouse: left vs. right-clicking the mouse, using modifier keys while using the mouse and saving their work – skills that can be applied to almost any other graphics application.”

Jaclyn Costello, a fifth-grade teacher at Emlen, said that, thanks to PCF, students are learning to apply basic engineering and design concepts to create a physical model or object. She added that they are learning to think critically and to not be afraid of making mistakes.

“My students are being provided the opportunity to use programs and hardware (a 3D printer) that they never would have access to without Jan,” she said. “This class offers success to those students who may struggle in the traditional classroom. Jan truly believes in every child, and he believes that every child should have their ‘ah-ha’ moment, whether it is in front of a chalkboard or a computer screen.”

She added that Jan not only has impacted her school by teaching 3D printing classes, but was at “the forefront of the campaign to bring a functional computer lab to the school.”

Costello, who has been teaching at Emlen for 12 years, said in 2012 she moved into the school’s old computer lab “with the hopes of teaching writing utilizing technology.”

“Unfortunately, the lack of functional technology made that task impossible,” she said. “The computers that were in my lab were installed around 2005, and many of them did not work. They turned off constantly and some never turned back on.”

She added that the two or three computers that did work could not run Flash, Java or Shockwave – software needed to play Internet games and create simple graphic illustrations. She said that, thanks to The Philadelphia Children’s Foundation and Mt. Airy USA, the school received 33 brand-new iMac computers.

Emlen’s principal Tammy Thomas said before the new computer lab was installed, the old computers were constantly shutting down, making the school’s intervention

“Reading and math programs, such as First in Math and LEXIA, are used to help meet the needs of struggling students not on grade level who benefit from additional support when accessing these online programs,” she said. “Students didn’t want to use the old computers, and the teacher allowed students the chance to choose colored Popsicle sticks in order to see which lucky student would get a working computer that day.

“It was awful and heartbreaking to see my students who wanted to learn basic computer skills denied this opportunity because of the lack of up-to-date and working computers.”

Costello said that summer Deruiter approached her about installing refurbished computers into the classrooms.

“At the time the computer distribution was completely inequitable,” she said. “Most classrooms had only three or four computers, of which only one or two worked, and those computers were in even more dire shape than those that were in the lab.”

She said PCF not only donated refurbished computers to the classroom, but cleared away broken, outdated computers, rewired the Ethernet switches and brought in brand-new cords for the networking boxes.

“Two weeks later, every classroom including Head Start had three functional computers and all of the old junk was cleared away into storage,” she said.

Thomas said the school has been working with PCF for three years, and during that time students have had “the privilege” of being taught 3D printing classes by Deruiter for the past two years.

She said the 3D printing class is “an amazing opportunity for a group of talented students to learn and discover new things centered around science, technology and math.

“The students in this class have shared their excitement around turning their ideas into reality,” she said. “Without the support of PCF and Jan Deruiter, our students would never have the opportunity to have this fun and exciting learning experience.”

Deruiter said PCF computers “become an essential tool for teachers in assisting students who are falling behind.” He added that a recent report by the Annie E. Casey Foundation found that “84 percent of households with children in low-income neighborhoods do not own computers.”

As a result, he said many students miss out on opportunities to benefit from technology by accessing information, learning valuable computer skills, and communicating with others. When he asked the students in Emlen fifth grade class how many students didn’t have access to a computer at home, nine out of 18 students put hp their hands. Of the nine students who did, seven didn’t have Internet access.

Deruiter said Mt. Airy resident John Bannan founded the Philadelphia’s Children Foundation (PCF) in 2006 to provide children in low-income households with access to computers and the computer literacy skills they needed to succeed at school.

According to PCF’s website, “In 2013, 4,500 students in K-12 in 20 Philadelphia schools were touched by PCF’s programs. PCF started libraries in 12 elementary schools with more than 16,500 donated books and provided more than 1,500 refurbished computers to low-income families.”

He added that PCF has changed its focus from proving low-income families with computers at home to installing computers in Philadelphia Public Schools. He said it costs about $50 to refurbish a computer, but that doesn’t include other expenses needed to store and install the computers.

“To do a whole school costs more because we have to buy network switches, patch cables, power strips, extension cords and pay for transportation and the labor to physically install them,” he said. “It can cost up to $5,000 per year to outfit one school and perform the necessary software updates and hardware replacements.

“While the computers themselves are free, refurbishing costs money. We have to purchase replacement hard drives, because old ones are often shredded because of HIPAA laws. We also have to purchase memory. Machines have to be inspected, cleaned (vacuumed and blown out), drives and memory installed, and then Linux (a computer operating system) has to be installed. Installing Linux is the most time consuming part.

PCF recently donated 20 computers to A.B. Day Elementary School. Besides computers, the organization has donated used iPads to local public schools, including Jenks, Houston, Henry and many others.

He said currently PCF has about 1,500 desktop computers in inventory. Most are from Health Partners Plans hospitals. Besides desktops, he said the organization has more than 100 laptops from the Radnor School District. He said they all need to be refurbished before they can be delivered and installed in Philadelphia schools.

Deruiter said the schools that PCF has supported have seen an improvement in math and reading performance as a result of being able to access Web-based “Intervention Tools” (educational websites such as First in Math) during class. He recalled a comment on PCF’s website by Emlen Kindergarten teacher Kimberly Pellak-Tana, who wrote that 12 of her students “entered kindergarten lacking basic skills, so they were registered on the LEXIA reading program.”

“I would monitor my students’ LEXIA progress daily,” she wrote. “By the end of the year, ALL my students mastered the Pre-K skills they were lacking. And six students obtained their Kindergarten skills and moved on to first grade by April/May.”

Deruiter said that with the community’s help, PCF is making a difference – one student, one class, one school at a time – because, as PCF states on its website, “Every Student Deserves a 21st Century Education.”

For more information about the Philadelphia Children’s Foundation or to make a donation or volunteer, go to phillykids.org or call 215-242-5115.

This article above is published here in case it becomes unavailable in the future. The original resides on the Chestnut Hill Local’s website at http://www.chestnuthilllocal.com/2016/05/18/pcf-changing-childrens-lives-one-computer-at-a-time/