PCF placed roughly 60 computers into various classroom at Emlen at the beginning of the 2014-2015 school year. Due to the success of our pilot program there, PCF received official permission from the Philadelphia Public School District’s IT department to roll out our Classroom Computers program to other schools.

After our successful pilot program, we are now officially
allowed to work with other schools directly!

Above all, what we learned from Emlen is the utilization and value of placing computers into resource-strapped Philadelphia public school classrooms. They were being utilized almost as fast as we were able to install them into classrooms. And from the end of year utilization surveys, it became clear they’ve had a positive effect on student performance at all grade levels as well as an increase in computer literacy.

It also made us realize that generally speaking, supporting schools is a more effective way to support students than trying to work with families directly by placing computers into their homes.

From all the testimonials from Emlen, here are two that seem most descriptive of our efforts and the value of our Classroom Computers Program:

“When I tell you that my teachers and students were ecstatic about being able to have access to more technology within their classrooms, that’s an understatement! We went from one or two computers to a classroom to three computers to a room. Before this program , I didn’t even have enough computers to place into my Pre- K classrooms. Now every classroom in building has access to technology to support the instructional program. The students enjoy the additional time they now have during center activities to access our interventions such as First in Math and LEXIA. We are excited that our students have access to more computer technology and realize that we would have never been able to afford new computers for each room!”

“I have been the TTL (both acting and appointed) for four years at Emlen Elementary. The lack of technology in the classrooms has always been a great issue. The computers that were there were basically obsolete…They could not run Flash, the Internet did not always connect, and getting them to run web based programs was usually not an option (as they could not keep up with the increasing implementation of Java and Shockwave in today’s programs).

Before two years ago when people would approach my school about donations we would often take it with a grain of salt. So often they have the right intention, they just don’t understand the mass undertaking that they are embarking on. This was before the Mount Airy Coalition came into our lives. The friends and community partners that we have met through this organization have completely changed our school.

Through the Coalition, I was introduced to Jan Deruiter and the Philadelphia Children’s Foundation. They brought me into a casual sit down over the summer to discuss what we needed as a school. It was not an interview, it was not a grant, it was a sit down. It was a ‘What do you need as a school to make technology happen here?’ conversation. I told them what we had, what we wish we had, what our school could handle. Quite frankly when they spoke of the Linux Operating System, I was slightly nervous. My staff is not exactly what some would describe as ‘tech literate’ or even tech friendly. I worried because in my mind if they could not go to the ‘little maginifying glass’ and type in the program that didn’t open right up I was afraid that they would basically shut down all options. I could not have been more wrong.

Jan Deruiter had me create a list of bookmarks that the students would use universally. Each one of these sites is bookmarked directly on the Firefox toolbar, even the Kindergarteners are having success in getting on the sites they need to go to.

Before the second week of the school year, we had three functional computers in each and every classroom. Each computer that has been donated has a little sticker on it that offers contact information in case of any issues. John and Jan made me aware that it was absolutely not my job to fix any problems and that they would come and fix any issues that the computers were having. The only issues that we have had 5 months into this has been the updating of Adobe Flash, which on any given day will take 2 minutes of my time. This time last year every prep period, TTL, and lunch period I had were used fixing machines that really had no place in today’s classrooms. These days my prep is used for preparing, my lunch is used for eating, and my TTL is used for many other things besides basic computer repair.

I cannot thank the people at the PCF enough.” 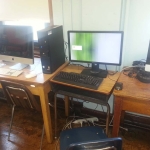 Computers installed into the classroom 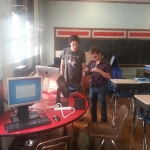 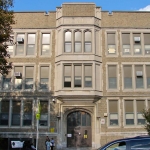